​
Non-Consensual Relationships with Ghosts, originally presented at La MaMa, reveals that the ghosts of totalitarian past and present enter to haunt our stories. The narrative that got us here no longer serves us. Thus, immigrants and refugees respond with urgency to resist and survive, creating a theatrical language of dissent and pleasure. Susana Cook redefines presence, the energy of the people who inhabit our life, and the ghosts of our past following us everywhere. Political satire and resistance theater at it’s best. 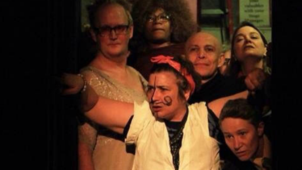 Through the beauty, daring and grace of dance, this shared bill of choreographers express their strength and pride with work by Kiran Rajagopalan, James LaTeek, Nikolai McKenzie, ColemanCollective, Jordan Martin, Filip A. Condeescu and Anooj Bhandari.

Yoseli Castillo brings La Noche Bohemia / Bohemian Night to the Bronx! This bilingual LGBTQ open mic has been around since 2005 in Washington Heights. The medium this time is theater and the featured artists are actors Andres "Chulisi" Rodriguez and Marcus Potts. The open mic is open to other artistic disciplines. As usual, Cany de La Vega DJs. 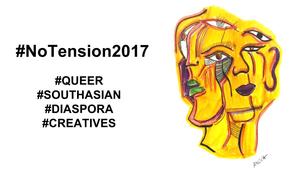 #NoTension2017 is a celebratory showcase of queer South Asian diaspora creatives: artists whose background is from and whose work is situated in Afghanistan, Bangladesh, Bhutan, India, Maldives, Nepal, Pakistan, Sri Lanka, Tibet and the large diaspora. The first iteration of #NoTension will host the #BRWNISGLD participatory art space, original art vendors, community organizations, local diaspora chefs, and a multimedia performance showcase hosted by Desi drag queen LaWhore Vagistan. #NoTension is a collaboration between Daya Arts and Bronx Academy of Art and Dance (BAAD). Co-curated by Kiran Rajagopalan and Anuva Kalawar.

In “I Just Love Andy Gibb” two characters have a conversation across time – the late 1970s and today. Roy is a dark-skinned teenager in 1978 who is obsessed with teen pop idol Andy Gibb and Carlos is 40+ Papi living in current time who feels “woke” to the oppression he has navigated as a Black, Latino gay man in the Bronx. Through a hiccup in time brought on by a shared fascination with youth, men and pop culture, they traverse through a maze of race and desire.