180 minutes
*terrestrial features a 45-minute performance cycled over a 180 minute duration. Ticket holders may come and go at 15-minute interval

Inspired by the hot brown granules in both desert dirt and beach sand, terrestrial is a performance and visual examination of humans as earth and Black humans as having a long, continuing terrestrial history that far precedes—and will outlive—the past five centuries of white supremacy’s specific oppressions. The movement patterns are pathways, appearing and dissolving into geometric returns, similar to traces of dust on the desert horizon or footprints embedded in the surface of the soil, skin. A type of court dance referencing an embodied time capsule, the work assembles fragments of history, existing in a subterranean world.

terrestrial was initiated through a residency at School for Contemporary Dance and Thought organized through Movement Research. The work was further developed for Marýa Wethers’ Gathering Place: Black Queer Land(ing), created for and supported by Gibney. 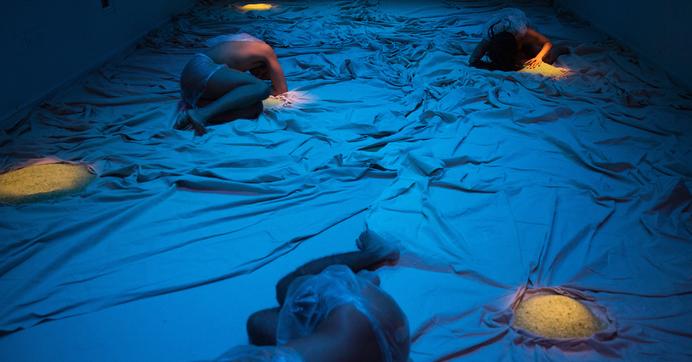